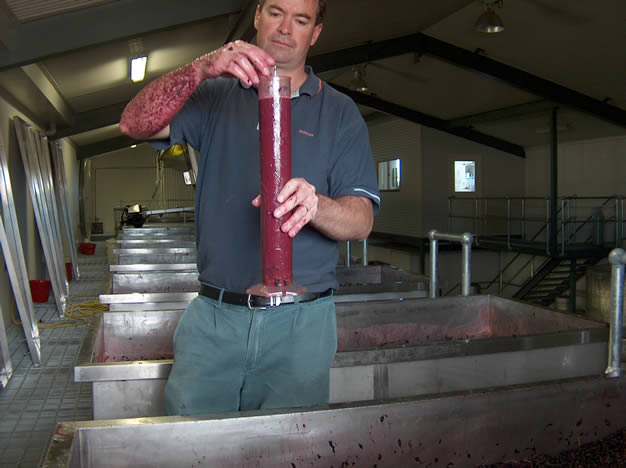 I’ve just written up a remarkable vertical tasting of Clonakilla’s Shiraz Viognier, one of Australia’s best and most consistent red wines. Of the 12 vintages tasted, my joint favourite was also the rarest – the 2007, of which only 1800 bottles were made.

This was because of an disastrous frost on November 16, which wiped out 92% of the crop. Frosts aren’t unheard of in Canberra District, which is at an altitude of 600 metres. The 1999 vintage, for example, was hit by a frost on October 28th which meant that the wine was made from second growth fruit, effectively starting five weeks late. It’s a nice wine, with a distinctive white pepper edge. But frost that affected the 2007 vintage was severe and late, and no second growth was possible.

Just seven barrels of the Shiraz Viognier were made from portions of two vineyards which escaped the frost, and 1800 bottles were released, and Tim Kirk (pictured in his winery) says that he turned from winemaker to grief counsellor, as he told people that there were going to be holes in their vertical collections. ‘I spent three weeks phoning people on the mailing list up to console them,’ he reports. The wine received amazing reviews, and has become a serious collector’s item.

3 thoughts on “The 2007 Clonakilla Shiraz Viognier”