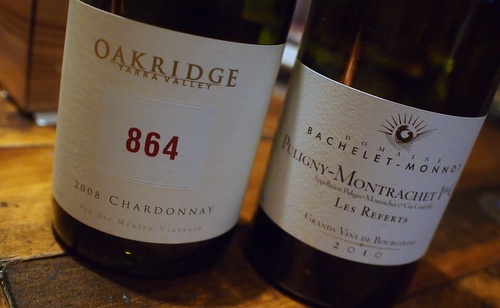 I was presented with these two wines blind by my brother-in-law Beavington. It was a fascinating challenge: both were clearly serious expressions of Chardonnay (we share an appreciation for great Chardonnay). But where were they from? I was in and out of Burgundy, Victoria (Australia) and New Zealand a few times. Subtle cues led me to the new world for both. But I was wrong: they were both wines I’ve had before, and rated equally highly, but one was from Burgundy. The notes below are from previous times I’ve encountered these wines. Both were superb. It’s so reassuring when you really like a wine blind that you’ve previously liked sighted.

Oakridge 864 Chardonnay 2008 Yarra Valley, Australia
From the Van der Meulen vineyard, dry grown, near Seville, cropped at 5 tons/hectare on red volcanic soils. There’s a mineral, spice and matchstick edge to the precise pear and white peach nose. The palate is complex, powerful and quite mineral with fig, toast and nut complexity as well as lively citrus fruit. Complex and fine, this is quite amazing. 95/100

One thought on “Two superb Chardonnays, Yarra and Burgundy”